Review of Spiritual Guidance Across Religions by John Mabry 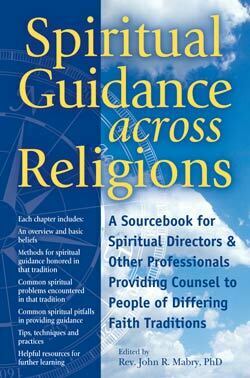 Let us begin with the following statement: Spiritual guidance is contextual. Often neglected in American culture, context in therapy, counseling, and spiritual care and direction is, nevertheless, of central importance. Paying much closer heed to the religious aspect in the context of pastoral care and direction, John R. Mabry has made a significant contribution to the field of spiritual guidance by editing the current volume. Organized into six major sections and twenty- four chapters, this work o ers a comprehensive resource for spiritual directors and pastoral caregivers who work with people from a vari- ety of faith traditions. With the help of twenty-nine highly qualified contributors who represent different backgrounds and religions and are practitioners of those traditions, Spiritual Guidance Across Religions covers twenty-four faith communities present in the United States, from evangelical Christianity, Roman Catholicism, and Reformed Christianity to Jainism and Confucianism.

In his introduction, the editor shares the story of Peggy, a Presbyterian Christian spiritual director who one day received an appointment request from a person who practices Japanese Shinto. Despite her doubts and panic, she agreed to go to the meeting although she did not even know what Shinto was. Mabry rightly concludes that Peggy’s professional training did not prepare her to work with someone from another religion. Mabry makes a good point, and I stand by that assessment. Institutions that o er spiritual guidance, for instance, are becoming daily more diverse in both the growing number of clients holding a wide range of religious beliefs and the diversity of the spiritual caregivers’ faith background. Although acknowledging the diversity of faith traditions in spiritual care and direction is one of the strengths of the volume, certain readers might find that the chapters are too short and too limited in scope. As Mabry warns his readers, the chapters are “brief and largely introductory in nature” (xi). One should not, therefore, expect in-depth discussions and exposition of the topics but general knowledge about a religious tradition. In that respect, readers should not forget that the primary purpose of this work is to give spiritual caregivers, counselors, and chaplains a starting point.

To cite an example, in the sixteen-page chapter on Reformed Christianity, Rev. N. Graham Standish briefly presents the work of Martin Luther and his sociocultural context and then moves on to dis- cuss the relationship between John Calvin and the Reformed tradition. Standish tells us about the Reformation movement and points out that several modern denominations are based on Reformed thought. After presenting an introductory background to the Reformed faith, the author then explains how we can understand spiritual guidance within such a tradition. Regarding Reformed Christianity, for instance, the author of the section presents to his readers four noteworthy aspects when offering spiritual guidance: (1) sin and grace, (2) surrender, (3) calling, and the (4) sovereignty of God. These four aspects are discussed broadly, yet in an instructive and fairly accurate fashion. The final section of the chapter addresses the expectations of clients from the Reformed tradition and what they may expect from a spiritual director or pastoral caregiver. In some chapters, authors may also discuss the common spiritual issues encountered in a particular faith tradition. In the chapter on Judaism, for instance, there is a one-page section listing the common spiritual issues for Jewish people, such as skepticism about the existence of God, anti-Semitism, people drawn to Judaism who were not born Jewish, and people feeling like outsiders. It is important to mention that the list of common spiritual issues is unfortunately absent from the Reformed and evangelical chapter. In those chapters that include a list of common spiritual issues, readers may find it useful to have this information in order to be aware of particular situations that are more common in a given faith tradition than in another. In the section about Judaism, for instance, attachment to suffering as a response to trauma is listed as one common spiritual issue. Although such an attachment is also found in other faith contexts, this issue is very marked in Jewish communities.

These weaknesses aside, and in spite of the fact that this volume is intended for a North American readership, this work serves as a unique tool for clergy and caregivers, even for those outside of the American sociocultural context. This encyclopedic volume takes on a neutral tone, allowing all readers to find some basic information about a major faith group without the need to look for specific religious materials. Overall, Spiritual Guidance Across Religions is highly valuable, and I think it is a must-have resource especially for students in pastoral care and readers interested in working in secular institutions as chaplains, or for those interested in exploring further career prospects in interfaith spiritual direction or care.