Review of Embracing the Body by Tara Owens 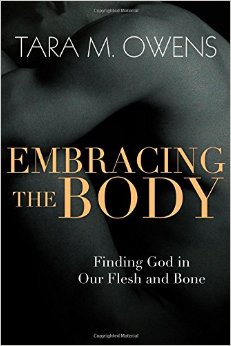 In her book, Embracing the Body: Finding God in Our Flesh and Bone, spiritual director Tara M. Owens deliberately focuses on the recovery of understanding the human being holistically in a culture that has traditionally seen the human body as negative and dangerous. Intended for a general readership, Embracing the Body is written in a simple and conversational style, yet provides a beautiful and thoughtful narrative. Overall, this book of thirteen chapters o ers readers both practical and theological insight to invite them to reflect on the importance of embodiment and sexuality within a Christian framework.

In Part 1: Body Reality, over the course of four chapters, Owens briefly discusses how the church “has inherited a number of fears about the body from our church fathers and mothers” (24) and how Gnosticism was responsible for the dichotomy created between spirituality and physicality by promoting beliefs that rejected the body (43). This background information, while limited in scope, helps general readers know more about the context on how the body-soul debate developed in the early church. Owens then moves forward with her discussion and reflection, going on to explore the dynamics of how a denial of the goodness of the human body usually leads to a broken church by means of “our refusal to receive God’s redemption in our bodies” (54). She puts considerable emphasis on this point, and asserts that the human body matters despite the fact that God made it out of dust “where the stuff of ourselves finds its origin” (66). In this respect Owens states, “Our bodies matter because without them we aren’t human. Without our bodies, we might be angels or demons, but we wouldn’t be people. Without our bodies, we simply wouldn’t exist” (77). Interestingly, despite her aim to promote a holistic view of the human person, Owens seems—probably inadvertently—to embrace a physicalist understanding of human nature. “Our bodies don’t lie, and what they tell us about how we perceive reality is the key to stepping into actual transformation in Christ,” she writes (45; see also pages 46, 54–56, and 59).

In Part 2: Facing the Fears, Owens discusses four significant false dichotomies concerning the human body: angel or animal, beauty or beast, touch or temptation, and desire or destruction. In order to avoid any downgrading of the human body in the Christian life, Owens calls believers—for instance—to stand on the edge of the tension where they may face their fears and learn how to bless their bodies by feeling the love of Christ (cf. 99, 113). This section o ers valuable insight that creates more awareness in the church about the dangers of false dichotomies concerning the human body. For Owens, such a dichotomic system “traps us into either/or thinking without leaving much room for God’s more expansive both/and responses” (88). I could not agree more.

In Part 3: Becoming Whole, Owens explores in the final five chapters some habits for believers to reclaim the sacredness and goodness of the human body and invites her readers to become whole. The first habit is about taming our fears and embracing our bodies in order to find redemption: “When we are continually giving over our bodies to God … we are able to be conduits of the power of heaven on earth” (176). The second way to reclaim physicality in the Christian faith is exploring God’s message in our bodies. “Believing that what you feel in your body matters is a first step in being able to listen attentively to what it’s saying, and what God might be whispering through it” (190). The third and fourth ways to rediscover the goodness of the body are to encounter God’s physical creation and to find the human needs of sexuality and connection within God’s design. The fifth and last habit to reclaim the sacredness of physicality is about connecting and communicating with the body of Christ. These practical suggestions offered by Owens are stimulating, but they sometimes seem to resemble mystical formulations. Indeed, the church needs to pay more attention to the crucial topic of embodiment (often neglected) but not at the cost of downplaying the spiritual dimension of the human person. Just as it is dangerous for the wellness of the church to hold a radical Platonic understanding of human nature—where the body is considered to be a source of evil— so it is equally detrimental to promote a physicalism, where the metaphysical dimension of the human person is reduced, or at least strongly overlooked. In that regard, some readers, for instance those coming from conservative theological circles, might find Owens’ book disappointing, even provocative.

In general terms, Owens’ Embracing the Body fills a gap that exists in current Christian literature. This work would serve as a starting point for those readers interested in exploring the intersection between Christian faith and embodiment, or interested in spiritual practices that strongly take into consideration our physicality. Furthermore, two particular features of Owens’ book are worth mentioning: each chapter ends with a practical section, and there is a frequent use of personal stories in order to engage readers. In a society in which privacy and sexual imagery are highly promoted, it is difficult to find authors who share their own vulnerability for the reader’s sake— an aspect that I deeply appreciate here. Finally, although one may eventually disagree with Owens, especially in her tendency to promote some version of physicalism as mentioned above, she makes a significant point in Embracing the Body that must be highlighted: The human body is essential to human nature in the present life, so the denial of the goodness of the body is a position that the church should surely reject.