Review of The Cosmos and the Creator by David Fergusson 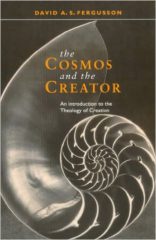 The Cosmos and the Creator: An Introduction to the Theology of Creation is a collection of four essays based on the Cunningham Lectures given by Scottish theologian and Professor David A.S. Fergusson at the University of Edinburgh in 1996. Every chapter of the book represents an essay. In this book, Fergusson discusses the Christian doctrine of creation based on the failure of modern theoretical approaches to offer an adequate understanding of the God-world relation. In that regard he rightly states, “the doctrine of creation must remain a distinctively Christian article of faith.” (p. 3)

In Chapter 1: “Creation in the Bible,” the author exposes a brief introduction of the doctrine of creation in the Old Testament alongside the doctrine of the Image of God and the relation of creation and redemption.  In this chapter, he also studies how the Genesis account of the creation is similar/different from other creation myths in the Ancient Near-East. In Chapter 2: “Creation and Cosmology,”  Professor Fergusson goes on to explore more the doctrine of the creation out of nothing, including a comment of the Cosmological Proof about the existence of God, and the plausible compatibility between this particular doctrine and the Bing Bang Theory. He gives strong arguments for creation out of nothing although there are new hypotheses about the origin of the universe and how life has developed. The opposition of traditional groups, both in religious and scientific environments, has been a difficult matter to deal with because many arguments out there are based on biased and preconceived ideas. Such ideas, Fergusson believes, have made the conversation between science and religion more difficult. In this respect, he hopes that researchers in a variety of disciplines may show more interest in the doctrine of creation out of nothing if they want to reconcile, adapt, and integrate scientific knowledge and religion in our modern culture. Thus he writes,

Chapter 3: “Creation and Evolution” explores the challenges of the Darwinist evolution, the controversy among Creationists, the dialogue with Evolutionary theory, and the topic of divine action and the animal creation. Fergusson briefly explains what the Darwinist Evolution Theory affirms and how Protestant and Catholic Christianity have responded to such challenges prompted by the theory. He then goes on to explain in which extent Christianity can enter into dialogue with Evolution. Chapter 4: “Creation, Evil, and the End of Life” covers the limits of theodicy, scientific eschatology, and biblical eschatology. Here Fergusson provides a theoretical framework for creation, evil, and life. He argues that both good and evil people are equally part of God’s salvation plan and that through observing the cosmos, people are going to discover that God is endlessly merciful to humankind

In conclusion, a  noteworthy aspect to highlight in his book is that Fergusson lets his readers know that the dialogue between theology and science has improved in the last decades because people with a strong Christian faith and at the same time with a high level of critical thinking have spent their time reconciling science and religion. In short, Fergusson adopts and promotes a compatibilist view where he invites his readers to heed natural theology and what it has to say. I recommend The Cosmos and the Creator for everyone interested in the interception between theology and science since it first offers readers a solid framework where to start concerning the origin of the universe in light of the Christian faith, and second, it also offers a selected bibliography for those readers interested in further study about the religion-science dialogue.